Merry Christmas to all. It has definitely turned out to be a white Christmas around here. Deep snow. My yard looked very nice. I had to shovel my drive and clean off my car for about a half hour. Not too bad but it was fairly cold and the snow was heavy.

I bought many of my gifts online this year, doing it a little early (the 13th) to try and avoid shipping problems, then shored them up with some local purchases, finishing on Christmas Eve with a visit to Whole Foods. I struggled to find good gifts, as usual, but I think they ended up reasonable. I kind of kludged together a bunch of small things and shopped for couples as one unit.

One of my items managed to get caught up in the USPS shipping fiasco. It was some tea, so I gave a temporary replacement gift of samplers of some other teas, plus an IOU for when the package arrives. The package left Philadelphia on the 15th, with current whereabouts unknown.

I received a variety of mostly smaller gifts, including: 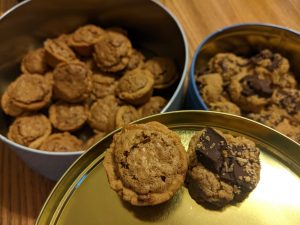 I spent several hours between Christmas Eve night and Christmas day baking desserts. I made my usual pecan tassies plus a variation of a healthy peanut butter blossoms recipe. I think the tassies turned out a bit dry and with a weird taste to them this year, probably my worst batch in my opinion. However, others seemed to enjoy them well enough. I often use Smart Balance for butter, but used a vegan version of Earth Balance, which may have not worked as well. I used that same butter alternative for my recent cheesecake though that turned out so well.

The cookies turned out pretty crumbly and definitely tasted “healthy”, but were still pretty decent with a good peanut butter and chocolate flavor. They didn’t look much like blossoms though, since I used chocolate chunks instead of kisses.

Dinner was scheduled at my parents for 5. I went to leave around the time I would’ve if the road conditions were just fine. My car had other plans: The battery didn’t have enough in it to get the engine going in this cold weather, and my Halo car jumping device, which has been on the fritz, didn’t want to do anything at all (lights and USB ports weren’t working either). I knew my seven year old battery was on its way out when it failed this summer, and it had struggled a bit in recent less-cold days. Anyway, I don’t know most of my neighbors well enough to ask for help, so my brother altered course and came and picked me up. Later tonight I borrowed my Dad’s working Halo, and my car started right up. I went for a drive to ensure it got charged as much as it could. I will need to go battery shopping tomorrow and get a new starter device in the near future.

We arrived about 45 minutes late for dinner, but that worked out well for when things were finishing. We had: beef roast, duck, stuffing, mashed potatoes, brussel sprouts, and rolls. All was delicious, perfect to fill me up after my day of baking and shoveling and car troubles. It had been a while since any of us had duck, and it was good. We filled up on dinner and had to wait to make room for my desserts.

We talked for a while. After dinner, we exchanged gifts. We watched the Lakers / Mavericks game for a bit.